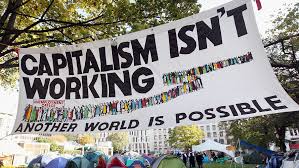 Democracy and the Future of the Quest for Freedom

“A state of shock is produced when a story is ruptured… Trump is not a rupture at all, but rather the culmination – the logical end point – of a great many dangerous stories our culture has been telling for a very long time. That greed is good. That the market rules. That money is what matters in life. That white men are better than the rest. That the natural world is there for us to pillage. That the vulnerable deserve their fate and the one percent deserve their golden towers. That anything public or commonly held is sinister and not worth protection. That we are surrounded by danger and should only look after our own. That there is no alternative to any of this.”
― Naomi Klein, No Is Not Enough

In the next two weeks we will take on neoliberalism and the devastating impact that the implementation of it has had on the world’s economy, politics, environment and human dignity.

Neoliberalism is a political theory that developed out of the Freiburg School of economists in Germany in the interwar period of the late 1920’s and early 1930’s[1]. The intellectual tradition of neoliberalism then flowed down through the political philosophies of Friedrich von Hayek, Ludvig von Mises, and the economic views of Milton Friedman.  The core commonality of their ideas, which were posed in opposition to socialism, state planning, and Keynesian socio-economic policies, are that capitalism is the only true basis of democracy, that the market place is the best vehicle to insure individual freedom, that state involvement in the economy is counter-productive, and that private property and a competitive market would preserve freedom. Another impetus of the neoliberal theory was the belief that it would create a world economic situation that would work to prevent local conflicts and international wars by spreading freedom throughout the world.

Boas and Gans-Morse note that the concept of neoliberalism “shares many attributes with ‘essentially contested’ concepts such as democracy . . . (but) is effectively used in many different ways, such that its appearance in any given article offers little clue as to what it actually means.”[2] From their research they note that neoliberalism has four general usages in academic and political writings:

Given the breadth of these various usages, clarity on the nature and definition of neoliberalism is imperative. Harvey has the most concise definition for our purposes:

Neoliberalism is in the first instance a theory of political economic practices that proposes that human well-being can best be advanced by liberating individual entrepreneurial freedoms and skills within an institutional framework characterized by strong private property rights, free markets, and free trade. The role of the state is to create and preserve an institutional framework appropriate to such practices. The state . . . must also set up those military, defence, police, and legal structures and functions to secure private property rights and to guarantee, by force if need be, the proper functioning of markets. . .. But beyond these tasks the state should not venture. [4]

The practical implications of these views are to create a socio-economic and political reality which distorts the concrete nature of the market place, democracy, civil society and, ultimately, freedom itself. Let us take up each one of these areas in its turn.

The ideal marketplace or economy, according to neoliberal theory is one where all parties, individuals, corporations and businesses (who are given the legal standing of individuals), are free to join into negotiated contractual relationships which will guarantee innovation and wealth creation for society as a whole. Private property and contracts are given a special level of legitimacy and a corresponding bundle of rights. Actors in the economy are assumed as being equals, regardless of the concrete reality of their situation, that is, that class, ethnic, racial, gender, age, disability, and so on, are contrived to have no bearing on the status of the negotiations when entering into economic relationships.[5] The fact that the vast majority of the people have no other ‘capital’ than their labor and thus have no choice but to enter the labor market in order to survive is ignored. “Individual success or failure are interpreted in terms of entrepreneurial virtues or personal failings.” [6]

Neoliberalism, as a theoretical framework, “is not, as several commentators have pointed out, entirely coherent.”[7] On the one hand it demands that the power of the state, in relation to the economy, be truncated and limited to creating and enforcing policies that maintain the rights of private property and freedom of corporate entities. The very real outcomes of these policies are the contradictory results of such policies and positions. Unregulated industry and commerce, under the guise of fostering competition, has led to the concentration of the ownership of enterprises and capital in a smaller and smaller elite, ending in monopolies and vertically integrated sectors of the international and domestic economies.[8] The creation of international institutions, such as the World Bank (WB), World Trade Organization (WTO), International Monetary Fund (IMF), and so on, to control capitalistic interests and protect ostensibly national assets lead instead to a globalized corporate elite who have no loyalty or interest in their respective nation states.

The planet is in disarray. Elite globalization, also called corporate globalization, a distorted form of global economic integration, powered by and benefiting only a few, is unleashing a dangerous blend of economic, ecological, and cultural crisis. The juggernaut of elite globalization, facilitated by radical, one-sided and often imposed economic ‘liberalization’ policies is moving very rapidly . . .As a reaction to the resulting fear and of moorings and direction, we see increasing global fragmentation and inflexible fundamentalisms, which in turn, are spawning dozens of social conflicts, wars and violence around the world.[9]

Where neoliberal economic policies were first put into practice speaks volumes about the real potentials and actual outcomes expected by these implementations. In Chile, the overthrow of the democratically elected Allende government by Pinochet’s coup on September 11, 1973 (a historical coincidence?) led to a brutal and repressive regime ruled by a military junta.[10] This action was taken by Pinochet with the full support of the United States’ State Department, Central Intelligence Agency, and other agencies which led to the imprisonment and torture of over 38,000 people and the deaths of over 3,000 by death squads.[11] By 1975 a group of U.S. trained economists, known as the “Chicago Boys” had been brought in to restructure the economic policies of the Pinochet dictatorship.

The US had funded training of Chilean economists at the University of Chicago since the 1950s as part of a Cold War program to counteract left-wing tendencies in Latin America. Chicago-trained economists came to dominate at the private Catholic University in Santiago. . .. Pinochet brought these economists into the government, where their first job was to negotiate loans with the International Monetary Fund. Working alongside the IMF, they restructured the economy according to their theories. They reversed the nationalizations and privatized public assets, opened natural resources (fisheries, timber, etc.) to private and unregulated exploitation (in many cases riding roughshod over the claims of indigenous inhabitants), privatized social security, and facilitated foreign investment and free trade. The right of foreign companies to repatriate profits from their Chilean operations was guaranteed.[12]

Similar policies were followed in several other South American countries at this time, most notably in Argentina.[13]

The push for the restructuring of the nature of the state and its relationship to economic policy was based on the neoliberalist perspective and on the immediate successes of the Latin American economies. This was characterized by a return to solid growth rates, high rates of return on foreign investment and capital accumulation[14] even though these gains were all essentially wiped away by the Latin American debt crisis of 1982[15] which “involved a 9 percent fall in GDP per capita alongside unprecedented increases in class inequality.”[16]  The social costs of these advances, however, were great and were the start of the redefinition of freedom and equality that we are living with today.

In next week’s blog in this series on the future of democracy and the quest for freedom, we will expose the anti-democratic nature of neoliberalism and its corresponding insatiable greed for amassing more wealth at the expense of the environment, other species, human dignity, people’s self-determination and perhaps the very existence of humans as a viable species.

[11] The Valech Report: The National Commission on Political Imprisonment and Torture Report, 2004.